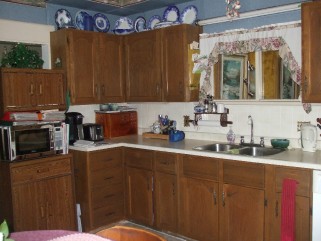 This was (and still is) the longest room of the house to renovate when you’re doing it alone.   As soon as I finished the sunroom I moved right into the kitchen. In order to keep my sanity I did one wall at a time and one projet at a time.  Each wall would take approximately 8 hours to strip wall paper, wash, plaster, prime and paint. I began with the wood panel closet. I primed and painted it white and the doors a tan colour. It didn’t match anything in the kitchen at this point and it was the least appealing place to look at so it was the first to change but later painted it grey and white to match the final product. 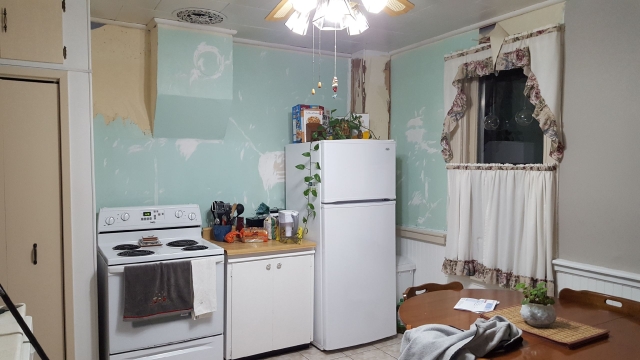 Next I began to prep the cabinets to paint.  To wash, sand, prime and paint this task took a whole weekend.  Once the fresh coat of white paint on the cabinets was totally dry I covered them with a hardening wax. I reused the original hardware since it goes with the country kitchen theme.

The kitchen took from October 2016 to about February 2017 to complete… maybe even a bit later.  It took several weekends to complete the walls. The biggest suprise was under the wall paper. As it came off I uncovered a 6″ by 6″ hole in the wall which I believe had been for some original pipes before the kitchen was modernized. Since the kitchen had an exsisting chair rail I felt that the walls could use some wainscoting (which will also hide the hole in the wall) I purchased bead board and some trim and created a newer fresher look in the kitchen.  I kept the wainscoting white and painted the walls a softer grey.

I measured the walls for the wainscoting and had the materials cut to size at Lowes. They have a wood cutting section at most locations. I purchased a mitre box and hand saw for the trim which is super inexpensive and easy to do. Make sure to measure at least three times before you go to get the wood cut or decide to do it on your own. You can also rent a nail gun and compresor from your local home hardware store if you don’t have one or wish to purchase one.

To balance out the look of the room. I decided to invest in two new cabinets to flank either side of the stove.  Orginally the stove was against the closet and there was a cabinet in between the stove and fridge. The cabinets did not come with a counter so I improvised and grabbed slab of solid wood, had it cut to size at Lowes, purchased some edging, stain and sealer and made one myself.  The cabinets cost approximately $215.  And for the supplies to build the counter top it was roughly $25.  This is the biggest investment in the kitchen to date. But the end result was well worth it.

Decorating the kitchen was a lot of fun! I did a hand drawn picture of how I wanted it to turn out before I strated to collect and buy things.  I also looked through what I already had to see what I could reuse.

The inspiration was from a print that I was given that was found on the side of the road. The only thing I changed was the colour of the frame using black spray paint. 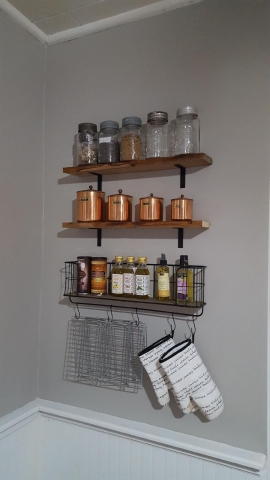 To the right of the picture I hung a metal rack that has a bar and hooks to hang things off of. Above that two salvaged pieces of wood from my barn with L brackets I purchased and spray painted black. I purchased some old glass and metal jars from St. Jacobs antiques (they have the best prices for antiques that I’ve seen any where in ontario).  The copper tin set was from the Meyersberg Flea Market for $5.00 – couldn’t refuse that price.

I want to do a white subway tile behind the stove and fridge and on the wall behind the sink, but for now I will wait.  The tile behind the sink now is in excellent shape.  I will wait and do it at the same time as the counter tops (also in great shape). I continued making smaller shelves with the barn wood and L brackets for the stovery wall.  These shelves house some of my most used items in the kitchen. Spices, rice, popcorn kernels ect.. a couple plants on the upper shelves and top of the fridge to liven up the space. At Homesense I found a blue wall mount planter.  I quickly realized it would be the perfect utensil dish and wouldn’t take up any counter space.  I also purchased two adorable tins for dog treats and dog food.

Final touches included an old farm house table for $60 from the Meyersberg Flea Market. The only thing I did was add Castors to the legs to raise it up another inch.  A set of placemats from the dollarama and a lavender plant from Homesense. 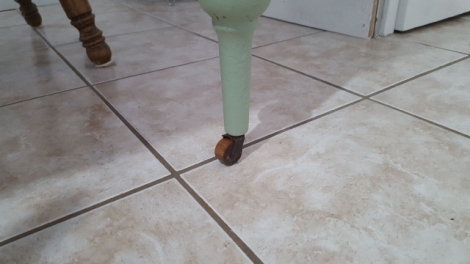 While cleaning out the basement I found an old EXIT sign wedged in between some papers.  It was apparently from an old coaches office. I hung it over the basement door for a bit of fun! And that was it.

So far the cost of the kitchen is about $700.00. I will eventually want a new counter and back splash which will drive the cost up significantly.  As you can see the reno is night and day. And I’m absolutely in love with it. 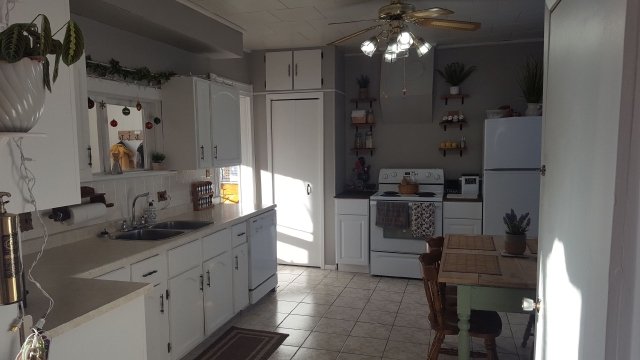 View all posts by mycountryfarmhouse